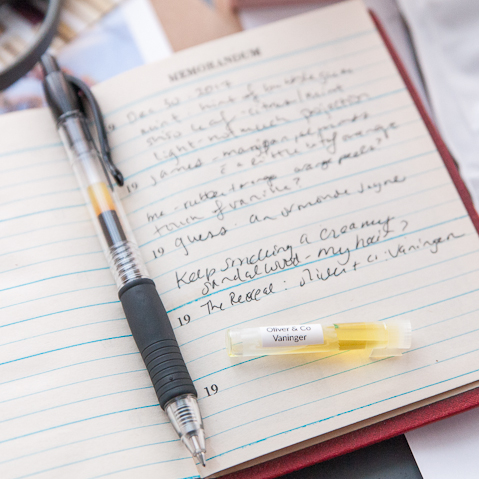 Today I decided to take a page out of my friend Ashley’s book… er, blog.

Since I’m serious about not purchasing any bottles, partial or otherwise! for 2018, I thought I’d dig into my sample stash for some fun. Reaching into a box blind (actually, I dumped the box onto the floor and rummaged) I would cover the sample vial’s label with my hand, apply it without looking at the label, and sniff for an hour or two.

I only lasted for an hour, but it was instructive! Next time I will go for a full two hours, because I believe that the base notes were really only starting to peek out at an hour, and I’d like to give my nose a real chance at discerning notes.

So, what have we got? My impressions below:

It didn’t seem to be doing much for about 20 minutes, so I showed it to my partner, and his sniff impression was this: “Almond… like marzipan, but with citrus. Orange.”

I was very interested in him smelling marzipan, because I smelled NO almonds at all!

I continued doing my yoga, and I smelled a whiff of sandalwood, creamy, twice, very distinctly but sort of medium-light in intensity. I wasn’t sure if it was the perfume or something left in my hair from yesterday.

Toward the end of the hour, I smelled vanilla peeking out.

At about an hour, I decided to do THE REVEAL: Oliver & Co. – Vaninger edp.

I had no idea what the notes were supposed to be, so I looked them up, and looked up what heliotrope and hedione, specifically, smell like. Well, color me astonished when I found that heliotrope can smell like almonds, specifically as associated with marzipan and a powdery vanilla. If this is something I am somewhat anosmic to, it is no wonder I can only smell vanilla.

After reading the notes, I am not sure if it is by their suggestion that I smell a fluffy mallow scent. My conclusion is that next time, I will let the perfume unwind itself for two hours, no matter my impatience.

My initial reaction: “I don’t know why this is a perfume, I would never want to smell like this.”

Verdict: I do not like this perfume sniffed blind, and in somewhat cold temperatures. It stayed quite close to my skin the entire time I wore it, and the ginger (and probably some combination of the other chemicals) smelled like hard, old, rubbery orange peels to me. As I remarked later, it smelled like kitchen garbage.

As I sit typing in front of my heater, the perfume has warmed up nicely, and it has moved more quickly to the warm vanilla “fluffy” mallow smell. I smell no tolu balsam at all, which is a bummer for me, as I love sap smells. It is a pleasant gourmand at this point, but it still does not interest me, and I would not purchase a bottle or a decant, personally.

Updating to add: it’s got quite a lactonic quality that I don’t like at all, three hours in. Do as you must. Just not around me, please.

“the balsamic richness of the vanilla absolute merging the sharp spiciness of the fresh ginger oil. that is the meaning of vaninger. sweetness becomes piquant and the other way round. this olfactive contrast is cover-layered with the airy shimmer of hedione and the fluffiness of heliotrope, which intertwining warmly, rounds up the composition into an addictively soothing fragrance.”